One set of instructions

Sometimes the only way is down. Sometimes, in a rocky time, you have to go back to the beginning to know how to start again.

Seven Coats: Divesting for Beginners is based on two stories that happen underground. The time is 3500 BC in Sumer (now Iraq) and 1991 AD in London, UK. One follows the myth of Innana, Queen of Heaven and Earth, as she steps into the kur, the Underworld, in search of her sister Erishkigel; the other a real-life voyage of ‘divestment’ from a culture fuelled by the oil that flows beneath the desert floor.

The challenge is to go through the seven gates of the ‘Great Below’ and unshackle yourself from a civilisation that began in the reedbeds of the Tigris river. It’s an upside down Cinderella tale for a world that has forgotten about consequences. But it is also an imaginative encounter with the Earth and the transformative life-forces that Innana, and those who follow her track, forgo their privilege and power to secure.

Part performance, part-presentation, part-discussion, Seven Coats – Divesting for Beginners asks: how do we get ourselves off the hook? What kind of people we do need to become for the future to happen?

With dance moves and tea! Come and join us as the year tips into the dark. 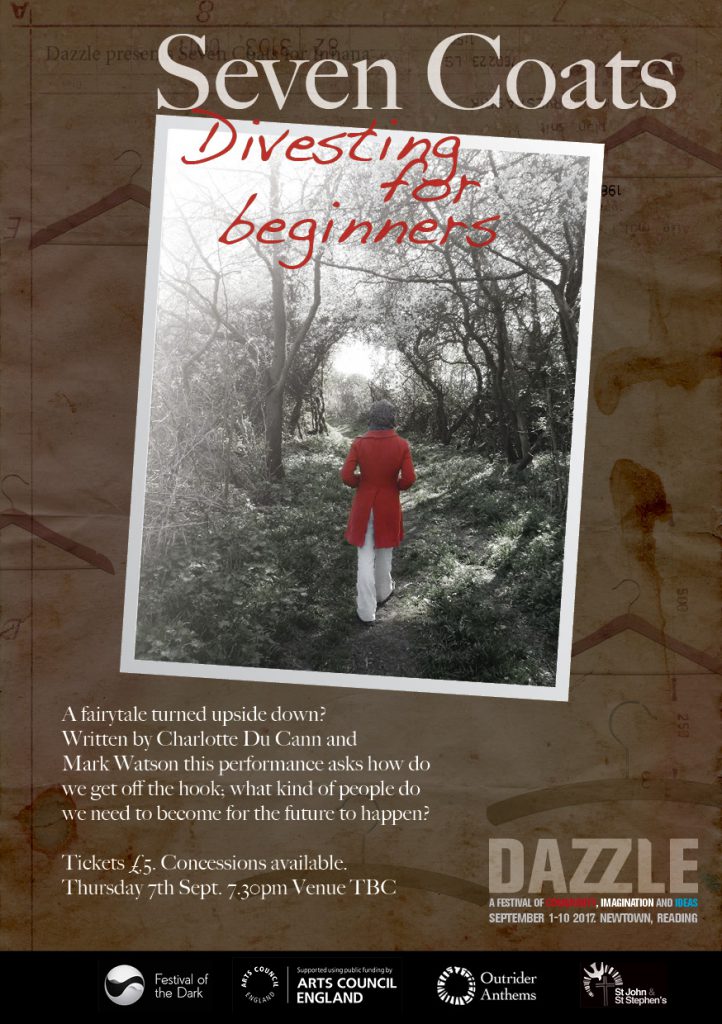 Charlotte’s blog post shares more on the backstory and inspiration for this event.

Charlotte Du Cann and Mark Watson are writers, editors and cultural activists based in coastal Suffolk. They have worked and collaborated together since 1991. Their first publication was the travelogue Reality Is the Bug That Bit Me in the Galapagos (Flamingo).

In 2008 they began reporting on community-led projects: first online in several collaborative platforms, and later as co-founders of the quarterly grassroots newspaper Transition Free Press. Today they are both part of the core team behind The Dark Mountain Project.